A LEGACY OF FAITH – PART I

The history of the South China Community Church reads like a novel, complete with courageous characters, plot twists, local color and inspiration.

The church’s modest site on Old Route 3 once belonged to the Baptists who worshiped, first in a brick building (built in 1827) which was sold at auction and moved in 1856, then in a wooden building erected in 1862, which burned in 1869. On October 27, 1884, the Baptists deeded the land to the Friends Society (Quakers) for $1.00, for the explicit purpose of erecting “a house of worship.” 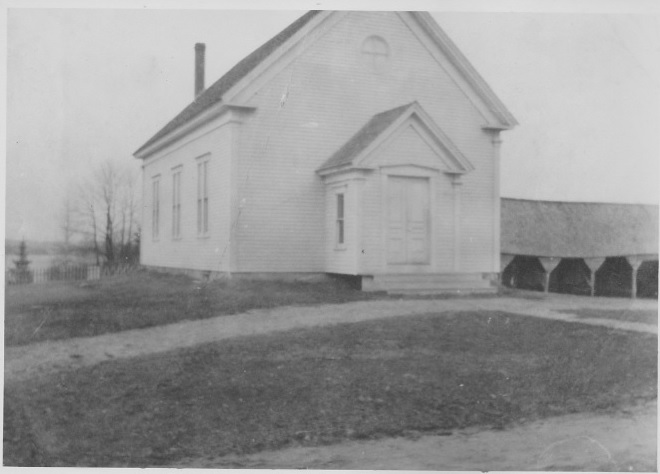 The Friends in South China had been attending Sunday worship in Dirigo prior to 1884. China’s increasing number of Quakers had already constructed three houses of worship – the South China Friends Meeting, consisting of 184 members, became the fourth.

The spirit of growth began with the Jones relatives, who built a one-room, one-and-a-half story pitched roof structure with its gable end to the road. (In 1904, Jeremiah Jones’ grandson Everett added two small rooms to the south and west and added a tower; a social room was added in 1932 to include a fireplace; an annex was built in 1956 to accommodate Sunday School and church suppers; and the kitchen was expanded and a study added in 1976.)

The church was completed in time for a double wedding December 24, 1884. Not surprisingly, the betrothed were Joneses! William Jones married Elizabeth Hoxie (his second wife) and Alice Jones married John Jones.

In addition to Sunday worship, Wednesday evening prayer, monthly queries and quarterly Meetings, classes for adults and children (First Day School) were held, as well as Christian Endeavor societies, temperance committees, missionary societies and later, Vacation Bible School. Also, the 1890 minutes show that six cemeteries were under the care of the Monthly Meeting.

“Outreach” was important to the Friends who gave “care and advice” through their missionaries to neighbors around the globe.

Among the “courageous characters” of this saga are Eli and Sybil Jones, world-renown missionaries who traveled throughout North America, Europe, Africa and the Near East. Eli was the South China Friends’ first minister. Also an educator and the founder of the South China Library, incorporated in 1830, it has been written of this holy man: “Eli uplifted the whole community to higher thinking and holier living and blazed on every tree a pathway for the next generation of boys and girls.”

A concern for education led the Friends to institute scholarships for their youth to attend Oak Grove Seminary, Erskine Academy and other secondary schools outside the area and out-of-state. Another concern dealt with temperance – in 1890, almost 200 members of the China Monthly Meeting of Friends formally petitioned Congress to pass a bill prohibiting the transporting of alcoholic liquors from one state or territory to another, or from any foreign country to the US.

Another example of the activist role taken by the pacifist Friends is a letter sent to Congress in 1886 supporting Senate Bill 335 for the promotion of “peace among nations.” Whenever a Friend “felt a concern,” in fact, it need only be brought to the Meeting.

Other ministers of note were Perry Macy, from Oregon, who organized a Boy Scout Troop; Charles and Elsie Matti who went on to missionary work in China (the country); Erskine Academy principal Neal Newlin and his wife Mildred; and more Joneses – Frank E.; Linwood W. and his second wife, Susan B. Sisson; Harvey and Laura; Peace (considered a prophetess) and Rufus, author, teacher and world traveler.

A LEGACY OF FAITH – PART II

Rufus Jones, who preached during the months of July and August from about 1916 until 1947, drew not only Friends, but people of all denominations to his sermons, which helped pave the way for the concept of community fellowship. And here is the amazing twist of the South China Community Church story: The year was 1930 and the pastor was a Friend from Rhode Island, Harold Tollefson, who had married a native, Gladys Jones. Pastor Tollefson was responsible for organizing the Junior Yearly Meeting (which served as a pattern in the US and abroad) to provide stimulating Vacation Bible School for young people of all beliefs. From the successful Bible Schools, a dream appears to have taken root – why not open the church to all denominations! “This wall is not real,” Rev. Tollefson was quoted to say, “but a hangover from former days when denominations were vitally concerned with their own expression of religious truth.”

A survey was taken by the Friends which found that the community was comprised of a number of Baptists, Methodists and Episcopalians – all were invited to join the new “Community Fellowship.” Pastor Tollefson believed that “The genius of the Society of Friends is that I can adjust itself to the changing conditions and maintain its vitality.”

To serve a religious body favoring no one sect requires a person with “many spiritual gifts and remarkable tact in expressing them,” was written in a history compiled by Miriam Jones Brown and Evelyn Jones Wicke on the occasion of the church’s 100th anniversary. Pastors Tollefson (1930-1936), Thomas Griffith (1937-1962), and David Van Strien (1962-1980) possessed such gifts and tact. And Pastors Robert Hotelling, Harvey Ammerman, Philip Watkins and George and Rachel Whittier (retiring in April) have successfully brought the congregation of the South China Community Church to the present.

Now, a new pastor is being sought to minister to the needs of this most courageous and diverse of congregations – a place where the individual is respected, where celebrations are shared and where people gather year-round to do charitable work. The spirit of deep-rooted faith and a sense of the future, long ago expressed by Jeremiah Jones when he spoke of “Digging deep and riding through the gates,” still prevails.

Miriam Jones Brown, in her centennial writings, recalled the wonderful holiday celebrations: “…none of them associations with the Meetinghouse you might expect, but they show a child’s happy memory of the Church as the center of the Community.” Mary Hoxie Jones has written: “Buildings are important if what goes on in them is important.” That sums up the South China Community Church.

Information and photos provided courtesy of Evelyn Jones Wicke, who, with Miriam Jones Brown, compiled “A History of South China Community Church” on the occasion of the church’s 100th anniversary in 1984. Material also gathered from the writings of Mary Hoxie Jones.